Home » Guide » Chinese Culture » How to be Lucky in China

The Chinese people have worked out that certain things – numbers, colours, animals, days, and actions – are more auspicious than others.

Put simply, it means that there are certain things that can bring good – or bad – luck.

Whether you agree with it or not, it is good to know how to please your Chinese friends, and how to make sure that you do not risk offence by appearing to cause them misfortune as you socialise with them.

Many symbols of Chinese Good Luck come from words that sound the same as, or similar to, others. Chinese people love word play!

No one will expect you to know and understand all of the intricacies of lucky numbers, but it is best to be wise to the most obvious ones. 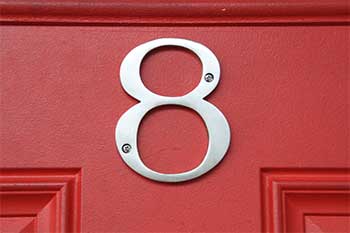 The best number is 8, simply because its name, “ba”, sounds similar to the word “fa” which means “to make a fortune”. If you can manage to be born on a day with an 8 in it, or live in a dwelling at number 8, or have a phone number with multiple 8s, then you are bound to be lucky.

Phone numbers with 8s are more expensive, especially if there are a lot of 8s. House or apartment numbers that contain 8 are very popular. And, of course, the Olympics in Beijing started on 2008 – 08 – 08. (Chinese dates are written in this order: year – month – day.)

Of course there are other lucky numbers because everybody likes to be lucky.

So that is pretty much everything except 4! 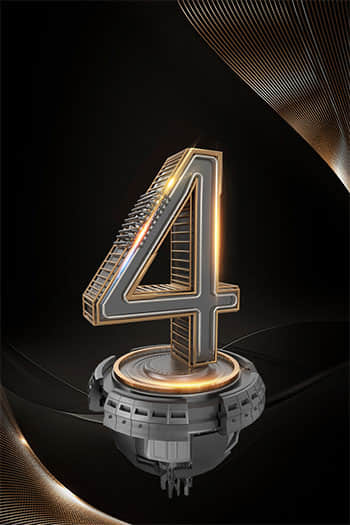 The worst number is 4, because its name, “si”, sounds very similar to the name for death. So phone numbers without a 4 can be more expensive, and apartments on the 4th floor (if there is one) are unpopular. This is very much like number 13 in Western society.

Combinations to change your luck

Number 5, “wu”, can also be unlucky, as it is usually associated with “not” – but this can turn around to be good in a combination such as 54 meaning “not dead”.

Pairs, multiples and even numbers are preferred to odd numbers. So, for example, if you want to buy your friend a gift of fruit, 6 apples would be better than 5 – of course, 8 would be better still!

Combinations can also increase the auspiciousness of numbers. For example, 28 gives “double luck”, and 38 can be “triple luck”. There are many other complicated combinations that you could only understand if you knew the language.

Not surprisingly it is very important to dress in the right colors, and decorate with auspicious colors. 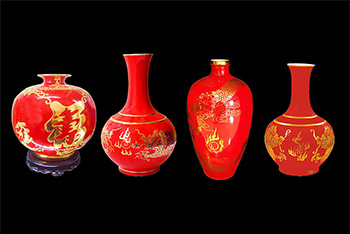 Can you guess the Chinese national color? Red, of course! The color symbolises fortune, success, beauty, happiness, celebration … and it’s just a really nice color. Weddings are celebrated in red, and gifts of money are given in bright red envelopes – such as at Chinese New Year.

Along with the red, you will notice a lot of the colour yellow. Red and yellow are often seen together, with the yellow giving the appearance of gold. The colour yellow was very much a symbol of the emperors of China as it was used in their royal clothing and to decorate palaces, altars and temples. It is also a very important colour for the Buddhists, representing freedom from worldly concerns. It is the colour of heroism, rather than cowardice as in Western culture. (However, it can also refer to pornography when the police are doing a raid.)

The color white is used for funerals, and is associated with death. Never wrap a gift in white paper, or bring white flowers except to a funeral.

Black is also not good, indicating solemness, formality, and evil. Black borders around a photo indicate that the person pictured is dead.

As a less obvious one, the color green has different connotations and meanings from Western culture, though not especially bad or good, and a slightly unexpected meaning in that a man wearing a green hat indicates that his wife or girlfriend is cheating on him.

While visiting China you might be doing something that seems very ordinary to you, until you notice people around you are staring. Here are a few things to watch out for. 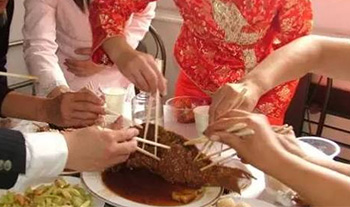 Turning a fish over

You are at a restaurant and they serve a whole fish on a plate. Everyone takes pieces of flesh with their chopsticks, and then, because you are a helpful person, you turn the fish over so that the other side can be reached – don’t do that! You may have just caused some poor fisherman’s boat to turn over.

You see a juicy pear in the fruit bowl, and you cut it in half to share with your friend – this is considered bad luck because the word, “fen li”, for splitting a pear is the same as the word meaning to depart, and so you and your friend will be soon parting.

Seeing a cute baby, and saying nice things about how beautiful he/she is can be a bad thing. People usually insult a baby in order to protect it by fooling evil spirits into thinking that it is not actually a baby at all.

Sticking your chopsticks in your rice bowl

You are sharing a meal around the table with your friends, and you have eaten until you are full. You stick your chopsticks straight down into your bowl of leftover rice and lean back happily – and then you notice everyone glaring at you. This is very bad table manners and bad luck because your chopsticks look like a tombstone in the graveyard. (Just put them down on the table!)

Giving someone a clock

You want to give a nice gift to your kind Chinese friends. You buy them a beautiful clock – but they just look hurt and unhappy. The word for clock, “zhong”, sounds like the word for the end, which is not auspicious at all.

A pretty umbrella also turns out to be a poor gift, as “song san”, for deliver an umbrella, sounds like separation.

Buying gifts for people to celebrate Chinese New Year can be especially tricky. The word for book sounds like the word for loss, and the word for shoes sounds the same as evil (in Mandarin) or rough (in Cantonese), neither of which are auspicious.

At the end of the day you go outside to enjoy a quiet relaxed walk, and you whistle a happy little tune. This will draw the attention of wandering spirits who may take you away. Even if that doesn’t bother you, it is likely to upset your Chinese friends.

Birthday celebrations are very important to ensure good luck. Some mothers have a caesarean birth just to bring a child into the world on an auspicious day. The day of birth is considered the first birthday, so Chinese ages are stated a year older than western ages. The birthday must be celebrated on or before the day, never after. Nowadays, sometimes birthdays are celebrated with a beautifully frosted cake, although this often becomes the fuel for a teenage food-fight rather than something to eat. Long noodles, symbolising long life, are traditionally eaten by the person celebrating his or her birthday. The noodles must not be cut with a knife, and are meant to be slurped until no more can be stuffed into a person’s mouth before they are bitten. 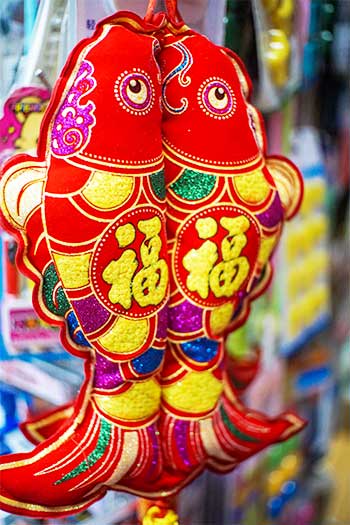 There are a number of symbols of good luck that you will notice everywhere in China. These are the most obvious and common ones:

The word for fish, “yu”, is the same as the word for surplus, and so you will see depictions of fish as symbols in many businesses.

Both chicken and lucky are pronounced “ji”, making this creature auspicious and depicted in many places.

You will often see a toad on the counter in a restaurant, store or hotel. With its seat of coins, it is a symbol of wealth and money-making.

This symbol of wealth, endlessly waving a paw across its face, originated in Japan, but can be seen all over China. There is a Chinese folk belief that when a cat washes its face, guests will arrive. 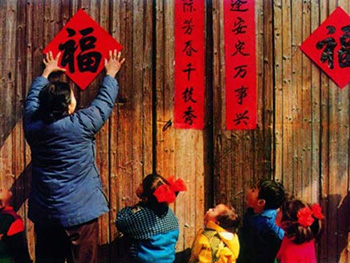 Chinese New Year is celebrated all over the world in Chinese communities, Chinatowns, and among people everywhere who are fascinated by Asia. As you prepare to take your trip to China, it’s a good idea to look up the details of your birth year, and Good Luck as it applies to you from the Chinese perspective, and people you meet will appreciate you taking an interest.

The Chinese zodiac follows a cycle of 12 animals. In order they are: Rat, Ox, Tiger, Rabbit, Dragon, Snake, Horse, Goat, Monkey, Rooster, Dog, Pig. The year 2015 is the year of the Goat, so you can work backwards to find your year, or find an online calendar, and even look up how the year of your birth is supposed to affect your character. You can find out more on this page.

Have an Auspicious Visit to China

For the sake of making new friends, showing respect, and having a memorable visit to China, it is worth being mindful of what is considered auspicious, and what is not.