Home » Educational Travel » Visit to the Best Universities in China

Visit the campuses of Peking University and Tsinghua University. Understand the history, culture and spirit of these two famous universities, and the knowledge and background of the attractions in these campuses. You will immerse yourself in their long history and rich significance. In addition, you may like to experience the different outlook of a university with an oriental background. 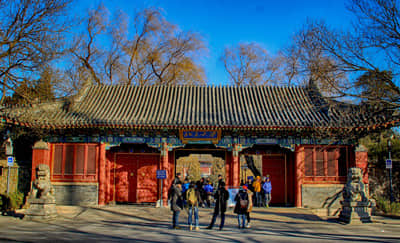 Founded in 1898, Peking University was originally known as the Imperial University of Peking. It is a comprehensive (offering a wide range of courses) and national key (recognized as prestigious and supported by government) university. The campus, known as "Yan Yuan"（the garden of Yan）, is situated in Haidian District in the western suburb of Beijing, with a total area of 274 hectares. It stands near to the Yuanmingyuan Garden and the Summer Palace. The campus makes full use of the precious historical heritage to create quaint surroundings. It is characterized by imperial gardens and picturesque scenery in regions south of the Yangtze River.

It was the first national university covering comprehensive disciplines in China, and has been a leading institution of higher education in China since its establishment. Peking University has continually played the essential role of pioneers in the course of China's modernization. The university's traditional emphasis on patriotism, progress, democracy, and science, together with its educational standards of diligence, precision, factualism, and innovation, have been passed down from generation to generation.

Erected in honor of Peking University’s 100th anniversary, the hall is an imposing building with a unique and traditional architectural style. The hall has become an important and popular center for academic and cultural events, and is also a window to showcase the image of university. 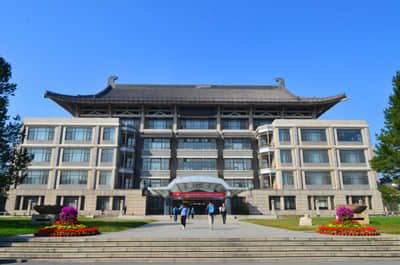 One of the earliest modern libraries, this structure is an example of traditional and classical Chinese architecture. Through the ongoing diligence of many generations, the library has developed a comprehensive storage system including rare books and treasures of great value.

The Unnamed Lake is the largest artificial lake on the campus, and is situated in the north center of the campus. Because opinion was divided on the name of lake, it was then proposed to call it the “Unnamed Lake”. On its east side is the Boya Pagoda. The Pagoda is 37 meters high with 13 stories, and was used as a water tower. Going along the path beside the lake, you will be enchanted by the reflection of the pagoda on the calm waters of the lake.

The Tomb of Edgar Snow is located on the historic site of the Flower Temple. He passed away in Geneva in 1972, and half of his bone ashes were buried at Peking University according to his will. In the 1930s, he was a journalist who came to China and then was also a lecturer in the Department of Journalism at Peking University. As a journalist, he did justice to the complex situation in China as he reported on it. He pursued world peace, and cared deeply about the fortunes of China. He also supported the students’ patriotic movements in his lifetime.

The marble boat, situated on the south side of the island in the Unnamed Lake, is a relic from the Yuanmingyuan Garden.

The Clock Pavilion is on the south bank, followed by the University Reception House (Lin Hu Xuan), the Flower Temple and the Tomb of Edgar Snow. As well as that, there are the former campus buildings, the Revitalizing China Tablet, the Statues of Cai yuanpei, Li Dazhao, and Cervantes, and the Alumni Gate. 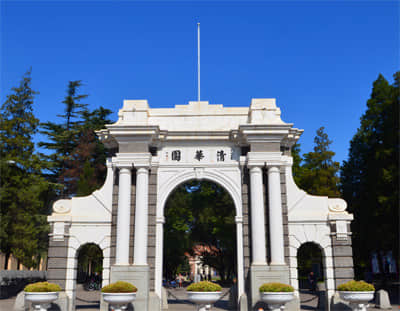 Tsinghua University was established in 1911 originally as “Tsinghua Xue Tang, which was built on the site of “Tsinghua Yuan” a former royal garden of Qing Dynasty, with an area of 386.34 hectares. On the campus, the pavilion and the lake with trees are very much in character. Many of the constructions display a perfect fusion of Chinese and Western architectural styles.

Tsinghua University is a national key, comprehensive research-orientated university with faculties of science, engineering, literature, liberal arts, history, philosophy, economics, administration, law, education and medicine. It has cultivated 2 Chinese presidents, 7 standing members of the Central Committee Political Bureau, and 600 academicians since its formation. The motto for Tsinghua University is “Self-Discipline and Social Commitment”.

This two-storied German style building was one of the main buildings of the school in its early stage. It was established for elite Chinese students who are preparing to study in the United States, and was a student dormitory building.

The four Chinese characters painted above the main entrance read "Tsinghua School", the first name of the institution when it was founded. The inscription was by Na Tong, a Great Scholar and Grand Minister in the late Qing Dynasty.

In the last few decades, it has been used as a teaching building and classrooms. Now it houses the offices of some of the main administration departments: the Graduate School, the undergraduate academic department and the R&D department.

This garden was originally the central area of a royal garden, situated in a beautiful and quiet place. The lake is full of lotus blossoms in summer. In 1927, a well-known professor and writer Zhu Ziqing strolled around lake and then wrote a classic essay Moonlight over the Lotus Pond. 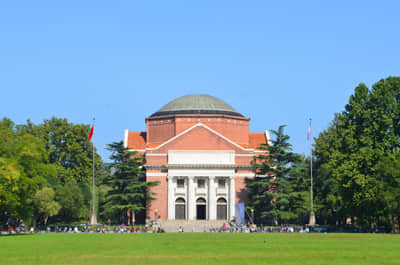 Shui Mu Tsinghua, which means "clear water and trees surrounding Tsinghua," is one of the most captivating spots in Tsinghua Yuan. It is located near the rear gate of the H-shaped Hall. It is a "garden within a garden."

The more popular name of the garden is Gong Zi Ting, which in Chinese means H-Shaped House. In the garden, the corridor snakes its way between the re-painted and decorated balustrade and pillars. Vibrant trees and lush flowers add to the sense of vitality. In 2005, the Tsinghua Garden was given Asia-Pacific Heritage Awards by UNESCO. It is not only a witness to history, but also includes an area at the rear to accommodate distinguished foreign guests. The great Indian poet Tagore stayed there when he visited China in 1924.

Located at the heart of the oldest area on Tsinghua campus is the imposing auditorium. Mixing Greek and Roman architectural styles, the 1,200-seat auditorium has a rounded roof, a brass gate, and four large white marble columns. It possesses few design embellishments; its magnificence is evident in its simplicity.

The picturesque scenes on both sides unfold before your eyes, as you wander as you would through an art gallery, observing the many attractive spots such as the Old Gate, School of Science, Palace of Ancient Moon, New Hydraulic Engineering Building, Library, and Sundial.

By Shirley Li
Web Editor
You May Also Like: 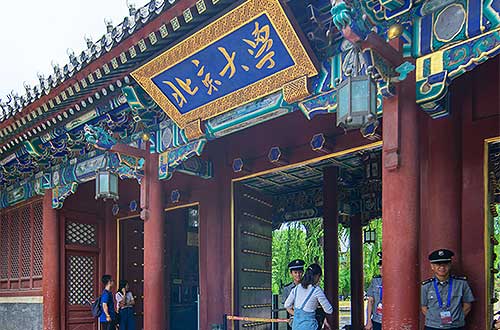 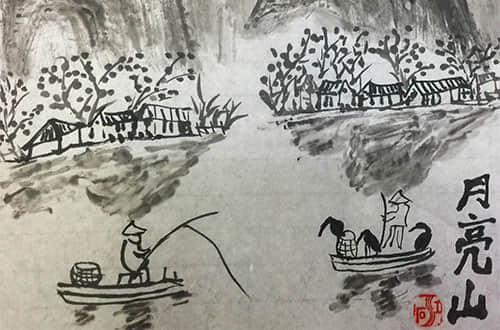 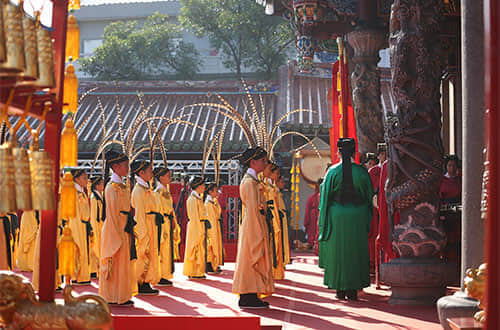 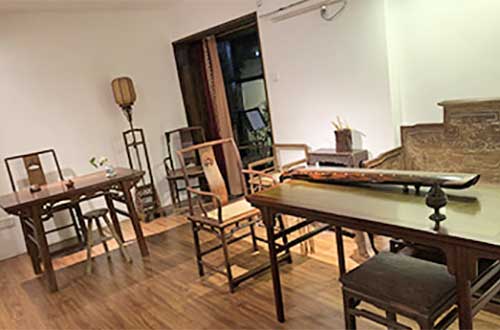