This article will look at the after-school life of primary and middle school students in China. For a more in depth look at the Chinese Education System, click here.

A student’s day doesn’t end when school lets out – even if that student is only five years old. Many Chinese parents pack their child’s afternoons, evenings, and weekends with enough extracurricular activities to keep them busy until bed time. These classes can run anywhere from 2-5 hours per day on weekdays, to 4-10 hours per day on weekends. 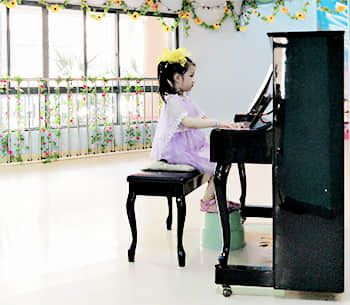 Music lessons are one of the most popular types of classes. The piano and violin far surpass any other in popularity, with the cello coming in a distant third and most other instruments far behind those three. There can be many reasons behind the piano’s and violin’s popularity, but one leading reason is that Chinese parents prefer their children learn an instrument for which there are many competitions. This accomplishes two goals: 1) their children are able to earn awards, medals, certificates etc. which represent their hard work and/or natural talent, and 2) the parent’s themselves can point to these awards as their own source of pride (ie, “My son won 1st place in the XYZ piano competition”). Awards themselves also help students get into better high schools and, if they continue improving and winning awards, into better universities. Slightly less popular than music, students and parents still love to show off their work. The most popular art forms are drawing and painting, once again mostly due to the larger number of competitions. However, sculpting, dance, and Chinese calligraphy are also fairly common.

While one might think that Chinese parents would prefer an academic subject for their children, this isn’t necessarily the case. Music and art classes are enormously popular, mostly because such a broad number of academic courses are usually covered in most Chinese primary (and middle) schools during the day. However, for those children who either severely dislike, show little interest in or talent for, music or art, more academic classes await them after school. The most popular among these are computer science, math, and English. 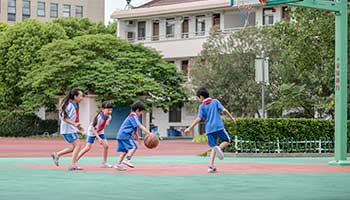 If a child isn’t registered for one of the above types of classes, they may end up playing a sport. Programs at most centers focus on learning and improving basic skills, having fun, and appreciating the values of teamwork, while some centers can be quite regimented with more emphasis placed on achieving excellence. A few of the more popular after school sports are swimming, basketball, football, and taekwondo.

Reasons for the long days and extended Extracurricular Activities

Parents in many western countries enroll their children in extracurricular activities so it shouldn’t come as much of a surprise to learn this is popular in China as well. What seems to be unique in China is how young the students are when they begin these activities, the degree to which they are pushed to excel, and the length of their full day. Chinese students often begin piano, painting, or English from as young as 2 years old, but more commonly begin around 7 years old. These activities aren’t usually for fun, but instead the children are pushed hard to excel and achieve perfection. Their full day can clock in at around 12 hours, with more extreme cases reaching a grueling 14-hour day. This can beg the question, why?

In general, one word can sum it up … competition. China’s educational system is incredibly competitive on all levels. There’s the expected competitiveness of getting into the top universities (link to China’s top 10 universities). However, there’s also competition now for China’s top high schools – public and private. If that seems tough, but understandable, here’s a tidbit many people don’t know – over the last 10 years, China has seen increasing competition to get into top primary schools … and even top kindergartens and preschools! You read that correctly. In major cities, wealthy parents, and their 3, 4, and 5-year olds, duke it out over limited space in the best preschools (which incidentally can cost over $20,000 USD/year!) So, it then makes sense that a 4-year old who can play Beethoven or Mozart, paint like Rembrandt, or have a complete conversation in English will have an advantage over those who can’t. Once in the best preschools and kindergartens, these children will be exposed to a much higher quality of education allowing them an advantage to get into the best primary schools. That in turn makes them competitive for middle, then high school, and finally helping them with the holy grail – acceptance into the most prestigious universities in the world such as Harvard, Princeton, Yale, Cambridge, or Oxford. A degree from any of these types of universities not only practically guarantees success in life, but also stands as a shiny, golden reflection upon the parents themselves.

Vacation time is not for sitting home and watching TV or playing video games. For wealthy and middle class parents, their children will participate in summer camps or even travel abroad. For children who live in rural areas, they will most likely be working during the breaks.

Summer (and winter) camps have started to become quite popular over the last decade. There are camps for nearly every interest imaginable, but the most popular camps focus on sports or general activities, with many camps offering English immersion as a bonus. It’s not unheard of that a 10 year-old will spend several weeks in France, Australia, or the USA during their breaks. Wealthier parents usually choose the most glamorous destinations – like Europe, New Zealand, or idyllic beaches in the Maldives. Other families will choose Taiwan, Japan, or South Korea for summer or winter breaks.