Differences in Education between China and Western Countries

From an Experiential Perspective

After 20 years of teaching in Australian schools, I taught in China for two years, and then also taught Chinese students in British Universities. 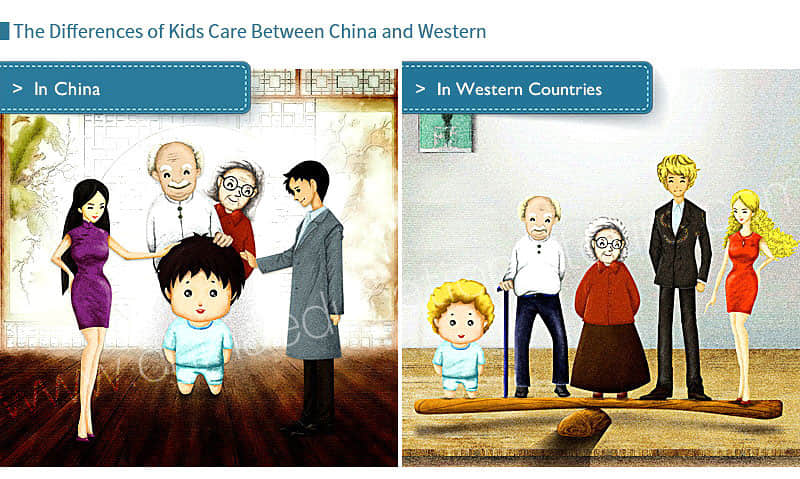 The differences of kids care between China and Western 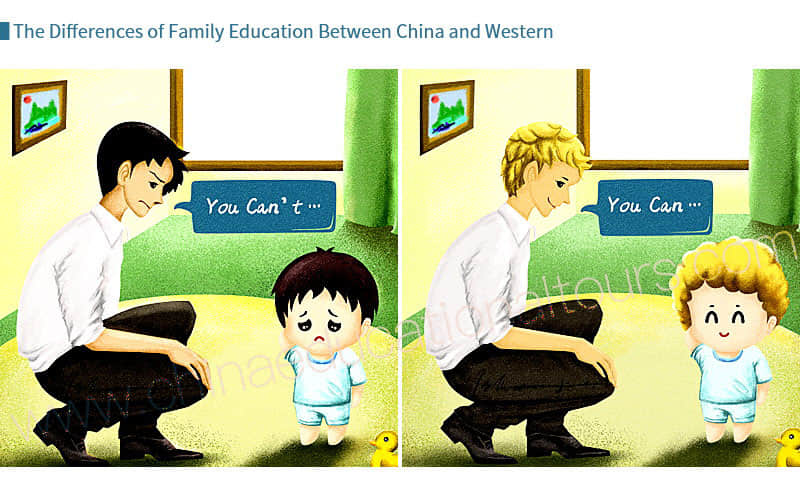 The difference between Chinese and Western family education

A cursory glance at Education could give the impression that there are no significant differences between Eastern and Western education. After all, children go through basically the same stages of schooling whether they grow up in China or a western country such as Australia, the UK or the US.

While there are variations within each country, such as from state to state, the chart below gives a general idea of how age-related educational opportunities compare between China and three Western countries - Australia, the UK, and the USA. 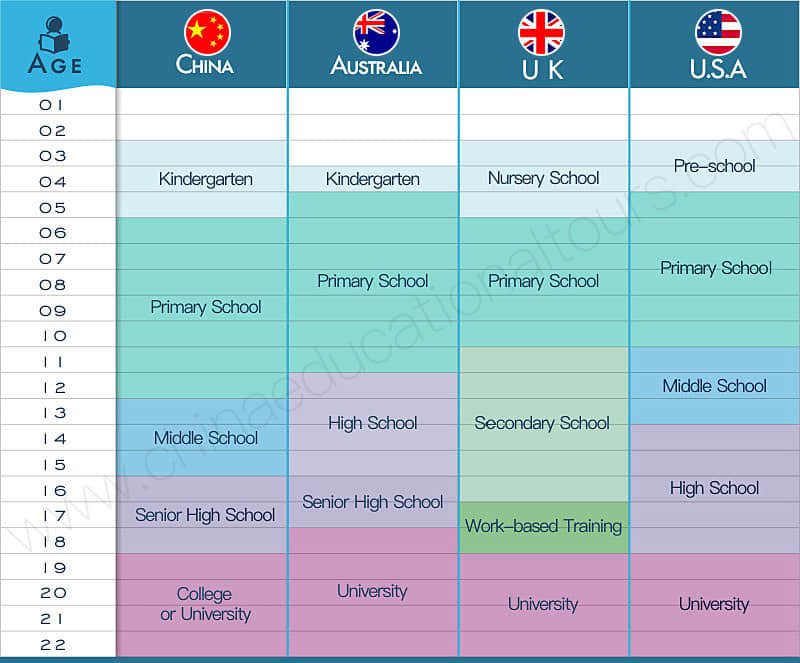 Nevertheless there are of necessity strong differences between Eastern and Western Education in overall Educational Policy and educational systems. This is due to differences in Government policies, population and school size, students’ educational orientation, and community attitudes to education and the importance of examination results.

Education in Western Countries is designed to prepare children and young people to become useful members of society, developing strong friendships that will possibly continue throughout their whole lives, and gaining sufficient skills and awareness so that they can go on after school and prepare themselves for gainful employment.

By contrast, in China there appears to be much more a sense of competition and desperation, and school not only equips young people to prepare for useful lives, but also attempts to test and sort them to eventually select people for the most appropriate positions in life.

The Chinese government has the unenviable task of catering not only to the children of wealthy business parents in the fast-paced, over-crowded cities, but also the families of the little people in the countryside, and the offspring of the long-suffering migrant workers. While there is a strong demand for high-tech maths and science training and English-medium education, there is still a desperate need for normal lessons of Chinese, Mathematics, Social Studies, Nature, Physical Education, Ideology and Morality, Music, Fine Art, and Labour Studies. Just becoming literate in Chinese is no mean feat for the young children whose rural life is not without hardship, before adding the completely different skill of being literate in English.

There are a number of fairly obvious ways in which education in China is quite different from education in Western Countries. The simplest basis for these differences comes from the fact that Education Departments in Western countries are coping with wide ranging diversity, amid loud calls for “fairness” and “inclusivity” under a democratic system where anyone can have a voice. The Chinese government, on the other hand, is managing a country of massive size, with an astronomical population and necessarily a very different system of government.

Then at the grassroots level, individual Chinese students must be under enormous pressure to excel so that they will stand out from the crowd, find suitable employment and hopefully prosper. Under China’s one child policy each child bears the responsibility of being their parents’ and grandparents’ hope for the future. Competition for employment is intense, such that even if they are lucky enough to graduate with a science degree, for example, they may still end up as a shoe salesman and be glad to have a job.

In the struggle to rise to the top, many parents and students in China have arrived at the conclusion that they need to firstly learn English, and secondly to study overseas. On the other hand, not surprisingly there are also those who are opposed to such a direction as this trend takes away from time and effort that needs to be spent on the Chinese language and studies that are more relevant to those keen to stay and prosper in China.

You know when you are driving past a school in any country because you will see children involved in activities inside the classrooms and outside, and hear their many voices. In Australia, for example, each school has its own uniform colours, and there is always a grass playing field, or oval, and other extensive outdoor play areas. Some schools are classed “super schools” with over 1 000 students, but generally school size is kept to a few hundred. And because of frequently shifting populations, school buildings are often surrounded by any number (sometimes up to 20) of temporary ‘demountable’ or prefabricated classrooms. Some schools are designed to become a shopping centre or other community building once the school-age population has declined and the school has closed. In other Western countries the schools may be larger, the outside play areas smaller and (as in the US) students may not be wearing uniforms.

With China’s overwhelming size and population it’s not surprising to see that schools are big and class sizes tend to be large. The buildings are often imposing structures, though not necessarily architecturally beautiful, and the students can be seen in the courtyard lined up in neat rows, all in perfect uniform, doing their daily exercises or political training.

In Western Schools idealistically each individual child is valued and looked after. The US has the “No child left behind” policy, while in Australia teachers refer to the policy of “inclusivity”. Disadvantaged students, and students with disabilities of any kind, are treated with extra fairness as teachers struggle with the diversity in their classrooms. This means that students with Special Needs no longer have their own special classes; instead they are included within the mainstream classes, often assigned an Education Assistant to stay beside them for a proportion of the time, based on their perceived needs. Children of immigrant families, whose parents may not speak English at home, are also integrated into mainstream classes and forced to pick up their second language as they go with assistance from their long-suffering teachers. School children from an early age are encouraged to think for themselves, to be creative, to express themselves, and to develop at their own rate. While standardised examinations remain in some form, the importance of exam scores in defining a student’s abilities and future continues to diminish. Testing is mostly school-based, with teachers designing appropriate evaluations. Portfolios – in digital and paper format – are popular in many schools as a way of demonstrating that students have reached designated learning outcomes.

This kind of comfortable, seemingly almost relaxed, individualised assessment can hardly be expected to be useful in the Chinese situation. In this situation, numbers and scores are essential to develop a reliable, fair and objective appraisal of a student’s ability and suitability. Competition for the best spots is cut-throat, and for each one their future depends on doing the best they can do.

As a Western educator involved in teaching Chinese students (as part of the push for them to learn English and fit in with western society), there were two differences that I quickly found most noticeable. The first is their apparent lack of creativity and independent thinking. The second concerns their willingness to work collaboratively.

In Western Education, creativity and independent thinking are highly valued, apparently in contrast to the old traditional Chinese education where a student, or apprentice, would learn from the master by carefully and repeatedly copying the master until completely competent. I saw an example of this when my family were visiting the Forbidden City (in Beijing) in bitterly cold weather, and we eagerly followed a young artist who invited us into the warmth of his studio and gallery in the grounds of the palace. We were puzzled when we looked at his original paintings on display because they all looked vaguely familiar. Asking him about this, he happily informed us that of course he had copied his master, but he had added some small changes in colour to make them his own.

Clearly that is an over-simplistic view of where this lack of creativity comes from. At one time we experimented with giving a group of Chinese teenagers a big bag of mixed postage stamps, without specific instruction, to see what they would do with them. Every single individual was instantly engaged in arranging and sorting the stamps, looking for the “right” way to categorise them. Their concentration was complete, and interrupting them was out of the question. Each one wanted perfection, and their “obsessive compulsive” tendencies were shining out clearly. Just as an example, that same activity with a group of Australian students generally gives a very different result. Some of them would have moved into sorting and arranging, but others would have been creating in other ways, and the room would have quite quickly become noisy and untidy.

In the UK, the Chinese students we taught had been promised many advantages by the agents who recruited them from their home country, and they were paying full fees for the privilege of being there. They had been warned that if they did not attend all of their classes they would lose their visas, and likewise if they did not attain high enough marks they would not be allowed to continue in their courses. However faculty were also warned that International students must not fail. I personally found this to be true when student marks I had placed into the computerised system were ‘adjusted’ by someone else. Apparently the high fees paid by these overseas students make it possible for less affluent local students to attend university. The system works and must not be impeded, and the students will be allowed to progress through their course regardless of low marks or poor attendance.

For High School students in Australia, the importance of their social life and friendships seems to exceed all other concerns. There is not a great deal of pressure to make it into college or university at the end of high school, because they can always have another attempt at later time. For High School students in the US there is considerable pressure to not only get into higher education but also to be accepted at the most suitable institution. However there is still a strong focus on personal fulfilment, happiness and friendships. Being bullied or belittled by fellow-students can be so disastrous that sometimes students take their own lives.

For Chinese High School students the most important part of their lives is their exam score, and sadly some students take their own lives because of perceived failure in this area. While there are concerns among some policy makers that their education is too narrow, extra-curricular activities are commonly added to their load in order to make sure every possible avenue of success is explored. I was teaching a class of possibly lazy but also very wealthy Chinese students who were preparing to soon transfer to a school in Australia, and the intention of the school administration seemed to be to guide them into becoming more hard-working. They started each day with an individual private study session, but in the absence of any guidance in this area, they merely sat in their seats sleepily reading aloud through their vocabulary list without paying attention to correct pronunciation or meaning. The timetable then followed a “10-days-on, 4-days-off” sequence, possibly for the benefit of foreign teachers who then had a long enough weekend break to travel all over China. However, the students on their 4-day weekends remained in school, sitting at their desks, still mumbling through their vocabulary lists.

The important differences between Chinese education and Western-style education are not about the physical schools, or sitting arrangements in the classrooms, or even teaching styles. There is a whole different mindset, different expectations and hopes. Western students are expected to develop mentally and socially and become well-rounded members of society. Chinese students would like the same, but instead must necessarily compete for a desirable future by scoring well in exams. 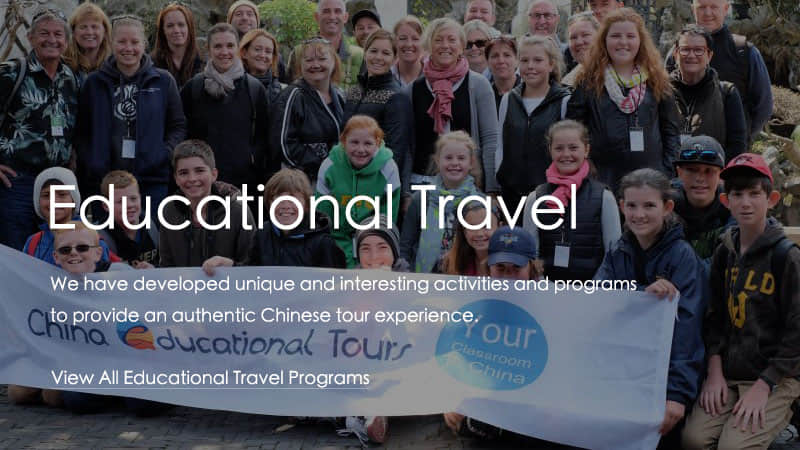