Which Sections of the Great Wall to Visit

Sections of the Great Wall in Beijing: A Quick Comparison 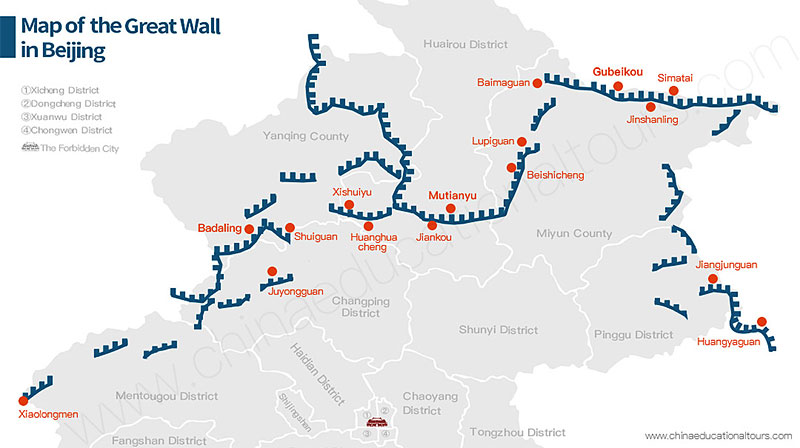 Map of the Great Wall in Beijing

Key Words: The steepest part of the Great Wall, with no artificial modifications, the best for hikers and photographers.

Jiankou Great Wall was named for its W shape which resembles a bow and the low point of it which looks like the notch in the butt end of an arrow (the nock). With severe natural weathering, it is the steepest and most magnificent section of The Great Wall located in Beijing. It has become a highly recommended spot for hikers and photographers for its wildness and lack of any artificial renovations. From the Ox Horn Edge, to the Big South Tower, the Gate of Hell, the Transmeridional Short Neck Tower, the Transmeridional Oil Basket Tower, the Arrow Nock, the General Tower, the Sky Stair, the Eagle Flies Facing Upward and finally the Nine-eye Tower, it runs for a length of 20km. It is a masterpiece by mankind of ancient times. You will experience the original landscape of the Great Wall as you visit it. If you are lucky enough, clouds that look like the waves on the sea will appear overhead. More Travel Tips »

Key Words: A haven for photographers

Jinshanling is known for its broad field of vision, large number of watchtowers placed close together, unique landscape, exquisite building style, sound system of military defense and being well-protected. It is famous as people say, “Jinshaling outshines every other part of the Great Wall”, and it is rated as the best section of the Great Wall. When you visit the Jinshanling Great Wall, it feels like you are stepping into a long corridor inside an ancient building. It is an amazing combination of unrivalled construction work full of the beauty of ethnic art. With attentive observation, we can find there is a varied pattern in the numbers of loopholes, vantage points and the hole that was used for water spitting. These patterns include peach shape, arrow shape, hilt shape, cirrus uncinus cloud shape (comma-shaped), saw-tooth shape, funnel shape, and so on. Every little pattern is exquisite and meaningful. The hundreds of watchtowers in the Great Wall have varied and peculiar shapes. The towers are of different shapes; there are square, round, rectangular, and octagonal towers. Roofs are also of different shapes; some are flat-roofed, domed, have awnings or shapes like four horns to the sky, and some have an eight-horned shape. Also some watchtowers have a strange frame. Some cornices are sculptured to resemble a variety of flowers or animals. All of these constitute a wonderful landscape that attracts photographers from all over the world. More Travel Tips »

Key Words: The only section that completely retains the Ming Great Wall’s original appearance. (This means it was accurately repaired according to the original style of the Great Wall, while other sections of the Great Wall include modern architectural elements after being repaired.)

Key Words: The earliest Ming Great Wall opening to tourists, and attracts the most famous people.

Other than the Wall itself, there are other attractions such as Great Wall Steles (monuments), Five-men’s Statue, Stone Statue of Stone Buddha temple, Goldfish Pond, Crossroad, Qijiguang Garden, Yuanchonghuan Garden, Great Wall Stele Garden and The Ancient City of Crossroad. Badaling Great Wall is now a complex scenic spot, consisting of 3 parts. The main part is made of the opening section of Great Wall, China Great Wall Museum and Great Wall Cinema. The second part is composed of three free gardens. The third part includes two affiliated spots, remnant Great Wall and The Ancient City of Crossroad. More than 500 heads of state, chiefs of governments and leaders of ruling parties have been to Badaling Great Wall up until 2009, such as President Reagan, Mrs. Thatcher and so on.

Located in the mountains about 30km to the north of Jixian County, Tianjin City, the Huangyaguan Great Wall was firstly built in 556AD. Qijiguang, the famous general of the Ming Dynasty, had redesigned and overhauled Huangyaguan when he was the Chief General of Jixian County. The architectural characteristic of this section are that the wall is made of bricks and stones, the watchtowers are round or rectangular using both hollow and solid bricks. Passes, walls, forts, blockhouses, watchtowers and Water Pass can all be found here. It can even be confirmed that it has every sort of architecture in it. Connected to the mountain and across the river, the layout is gorgeous, precipitous, unique and lovely rolled up into one. Here is the first Great Wall Museum and a collection of modern Great Wall Steles (monuments).

The first Great Wall Museum of China is the Huangyaguan Great Wall Museum in Tianjin, which is close to the Jixian Ancient Great Wall in Tianjin. This 41 kilometer-long ancient Great Wall was built in AD 577, and is located in the area of Huangyaguan that is about 30km to the north of Jixian County. During the Longqing Period in the Ming Dynasty, the national hero Qijiguang acted as the chief general of Jixian County. In order to strengthen the south border, he had decided to redesign and overhaul on the base of the original Great Wall of this section. The renovated Great Wall stretches from Banlagang Mountain in the east to Wangmaojing Mountain in the west. There are stone walls of the Northern Qi Dynasty and brick walls of Ming Dynasty in the Great Wall. The watchtowers are of various shapes, different materials and types, such as round and square, stones and bricks, hollow and solid. There are sentry towers built outside the wall and abutments set inside the wall independently. In the museum, you can study materials of the ancient Great Wall of China, Jixian Ancient Great Wall, the sabre that Qijiguang used, weapons and life products of frontier soldiers and other cultural treasures which are on display.

Key Words: The north gate of Beijing, rich with vegetation

Juyong Pass is known as the First Pass under the heaven; it is the pass that lies along the Northern Great Wall, located in the area about 10km south of the Badaling Great Wall. The existing Juyong Pass was built in the Ming Dynasty but fell into disuse gradually in the late Qing Dynasty, and the Gate Tower and other historic sites were repaired later on. Juyonguan Great Wall has precipitous topography and attractive scenery. The most famous scenic spot of Juyongguan Great Wall is Yuntai. It is the base of a huge lamaist pagoda Tower of Yuan Dynasty, and also the earliest and biggest over-street construction existing in China. Lingering here can make you feel the desolation, peace and 2000 years of history.

Key Words: The starting point at the eastern end

500 meters to the west of the Wall’s top mound, looking down along the Valley of Taolai River, you will find it becomes clear all of a sudden right in front of you. Here the flags are fluttering, and an ancient barrack ishidden. Only by stepping into it then looking back can visitors find that there is a half-opened underground cavern in the middle of Taolai River valley, which is about 200 meters away from the top mound. The Shiguan Valley Hanging Great Wall is located 14 km northwest of Jiayuguan City and 8.4km from the Jiayu Pass. It displays the culture of the old Silk Road and Great Wall.

Located among the peaks and hills of the southern Yinshan, Zhao Great Wall was a significant military base in ancient times. It was built through the mountains with a mixture of soil and stone. Stretching about 400 meters, most sections have collapsed and been rebuilt with stones for the outer, and soil and rubble for inside. Some better preserved sections are 1.5 meters high, 2.5 meters wide on the bottom and 1 meter wide on the top, so the cross section presents a trapezoid shape. But most sections were presented in a ridge shape, and several sections were hard to find.

Standing on this well-preserved section of the soil-made Great Wall, we can faintly see these historical sites stretching from the Big Temple, east to the Hao Village of sidewall, west to the Kun District. The ruins of the Zhao Great Wall and the relic of the beacon tower can be still seen clearly from a distance. This section of Great Wall was made of layers of soil, and the remaining base of it is about 3.5 to 4 meters wide and 1 to 1.8 meters high. Among the Great Wall’s relics, there may be found many potsherds of the Warring States period, and some specimens like half coins, flat tiles, terrines, bowls and copper chains. All these valuable materials were left for study so we can understand history, and be educated about ancient life.

The Hushan Great Wall was built during the Chenghua Period of Ming Dynasty (AD 1469) to defend against intrusions from Nuchen. But after Nurhachi became the emperor, he issued a decree that the people of the Shanhaiguan were not allowed to go outside the area to ensure stability and development of this region. The people inland were not allowed to cultivate or hunt within the scope of Manchu’s birthplace. However, through several years, Hushan Great Wall almost fell into oblivion so that for ages people mistakenly thought that the eastern end of Great Wall was the First Pass under Heaven, Shanhaiguan. In fact, as recorded in the The Military History of Ming, “Before the Ming, cautious border, east from Yalu River, west to Jiayuguan.”, and it was made clear that Great Wall “stretched east from Yalu River and west to Jiayuguan.”.

Now the renovated part of Hushan Great Wall is more than 1250 meters long, with street-wide building, beacon towers, enemy towers, battle towers and bastions. The magnificent design of the Ming Great Wall can be rediscovered. It takes advantage of the location along the hillside, winds to the north, close to Dandong City and facing North Korea across Yalu river. It is the Great Wall of beautiful mountains, clear rivers, pleasant weather and breathtaking views.

Key Words: The oldest part of the Great Wall in Beijing retains the most original features

This section of the Great Wall has not been reconstructed since the Ming Dynasty, and numerous watch towers and beacon towers have remained despite the fact that more than a thousand years have passed by. At the highest point, the General Tower affords the best field of view of the entire Great Wall. You can seize the opportunity to take a great shot of the panorama. Avoiding the crowded sections and the reconstructions, you will hike in peace with magnificent views of the wall zigzagging across the ridges, and enjoy the atmosphere of profound Chinese history. Finally, visit the unique 24-eye tower, a particular building on the Great Wall which cannot be found on other sections.

Key Words: the wild Great Wall has a partial segment submerged in the water, with impressive views and a steep climb

It is a great destination for hiking to meet the various needs of visitors. The tour can be connected to hiking, boating, and amazing sightseeing without crowds. All of these make this section favored by nature lovers. 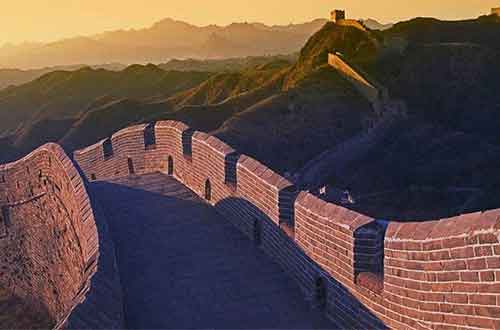 Top 10 Facts about the Great Wall 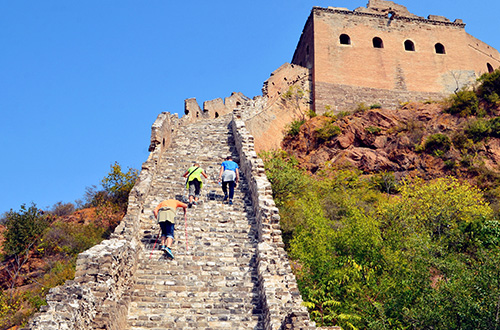 Hike on the Great Wall 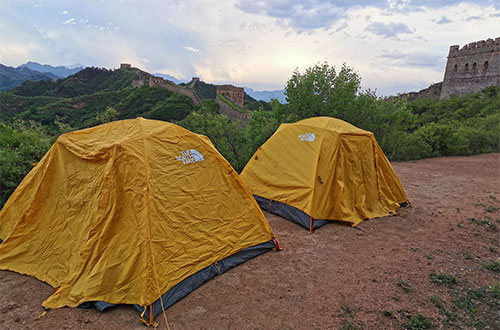 Camping on the Great Wall 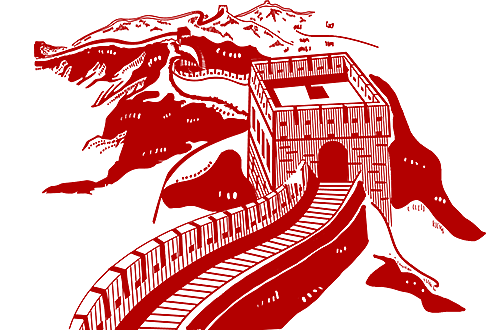 2 Poems about the Great Wall