2 Poems about the Great Wall of China

As a cultural icon of China, the majestic Great Wall has aroused people’s creative inspiration since ancient times, and some poems have become widely shared. For your enjoyment and admiration, here are two poems about the Great Wall:

Mountain Liupan — to the tune of Qing Ping Yue 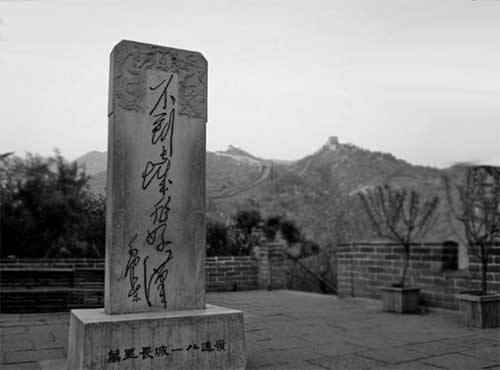 bú dào cháng chéng fēi hào hàn
不到长城非好汉，
A man cannot be a hero unless he climbs up to the Great Wall.

The “Blue dragon” hints at Kuomintang at that time.

The background of this poem is that the red army conquered the enemies’ cavalry and climbed over the Mountain Liupan. It expresses their resolution to overthrow the Kuomingtang and Japanese imperialism.

Li Guang (died 119 BC), born in Tianshui, Gansu, was a general of the Western Han dynasty. Nicknamed the "Flying General" by the nomadic people, he fought primarily in the campaigns against the nomadic Xiongnu tribes to the north of China. He was known to them as a tough opponent when it came to fortress defense.

Wang Changling was a major poet in the Tang Dynasty when it was the most prosperous period. However, the wars at the frontier had been prolonged for a very long time without any good news, and the troops had suffered losses. He worried and was eager for success and peace, so he wrote this poem. Even though in the period of strong national power, there was no one as courageous as General Li Guang who could frighten enemies. Each verse voiced his intended hope for victory and peace.