Hangzhou is rich in cultural and historical sites. There are a large number of natural and cultural landscape relics, representative of which are West Lake, Liangzhu Archeological Ruins, Silk factories, Tea Plantations, and many stories and legends handed down. It is known as "Paradise on Earth", a reputation earned by its beautiful scenery around West Lake and Beijing-Hangzhou Grand Canal.

Hangzhou has benefited from the convenience of the Beijing-Hangzhou canal and treaty ports, as well as its developed silk and grain industries, and was an important commercial distribution center in history. And now the Internet economy has become a new economic growth point in Hangzhou with Alibaba and other high-tech enterprises. We have some sample tours to Hangzhou for your reference. You can also click here to make your own Hangzhou trip.

Half Day Tour in Hangzhou

The famous Beijing-Hangzhou Grand Canal is the longest and one of the earliest man-made canals in the world. Together with the Great Wall and the ‘karez’ irrigation system, it has been called one of the three great projects of ancient China and has remained functional till now.

Private Half Day Tour in Hangzhou

Hangzhou was the capital city of Southern Song Dynasty for 138 years after the emperor was forced by the enemy to abandon the northern capital. He then went all the way to the south and founded the capital in Hangzhou. That made a perfect combination of southern and northern culture there.

City Tour of Paradise on Earth

With a history of more than 2,200 years, Hangzhou boasts numerous cultural relics. You can learn about Buddhism by visiting LingYin Temple, which was built in 326 and survived the ups and downs of Buddhism. Flying Peak is in front of it, with grotto art in southern China. On the second day, you will go to Meijiawu Tea Fields, which is one of the main tea producing areas of West Lake Dragonwell. Also you will not miss the famous West Lake before departure.

3-Day Private Tour in City and to Nanxun Water Town

Hangzhou is an ancient city with a history and culture of more than 2,200 years. You will visit the popular attractions, such as LingYin Temple, Flying Peak, Meijiawu Tea Fields and West Lake. Compared with other famous water towns, Nanxun is less touristy and has kept its original look. 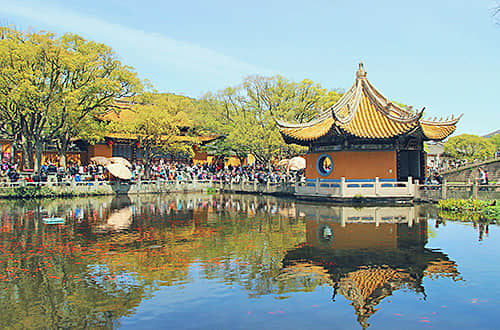 The Ashram of Avalokitesvara

A Two-Day Trip to Mount Putuo from Hangzhou or Shanghai

Mount Putuo is one of the famous Buddhist mountains. There is also a legendary saying that it is an ashram for Avalokitesvara to educate all living beings. During these two days, you will be totally immersed in Buddhist culture and the beautiful natural landscape.

The convenient transportation network of Hangzhou has made it an important commercial distribution center since ancient times. It still bears all the badges of its glorious and flourishing past. You will see museums, pagodas, and ancient water towns in Jiangnan style. Even though the city is developing fast, you can still experience the slow life by touring West Lake and Meijiawu Tea Plantation.